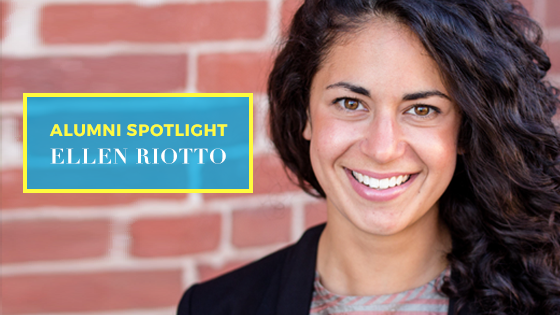 Coro Southern California (FPPA 2015) alumna Ellen Riotto began her role as Interim Executive Director of South Park Business Improvement District (BID) in January of this year. The BID is a 52-block area in Downtown Los Angeles. It is home to the Convention Center, L.A. LIVE, Staples Center, and the many cranes that pepper the downtown skyline. If the cranes aren’t indication enough, there’s a lot happening in South Park these days: the residential population is expected to triple in the next two years; the MyFigueroa project has begun construction along 11th St; and improvements to the Metro Pico Station are scheduled to begin later this month. In addition to keeping South Park clean and safe, the BID is active in the economic development of the area, with retail attraction, marketing of local businesses, and streetscape improvement initiatives.

The BID represents a varied network of stakeholders, each with different priorities and interests. Ellen draws from her Coro experience and training every day, as she communicates with real estate developers, property owners, entrepreneurs, and businesses large and small. Coro gave her the tools – from systems analysis to adaptability and communication skills – that allow her to be successful in her new role.

A native Rhode Islander and graduate of New York University, Ellen moved to San Francisco in 2012 for a job in the tech industry. After almost three years of feeling disconnected from the community around her, she decided to pursue a career in public affairs. Through the lens that Coro provided, Ellen fell in love with Los Angeles. “Anything is possible in this City, and I feel grateful every day to be a part of the incredible progress and precedent we set as examples for the rest of the country,” Ellen said of Los Angeles.