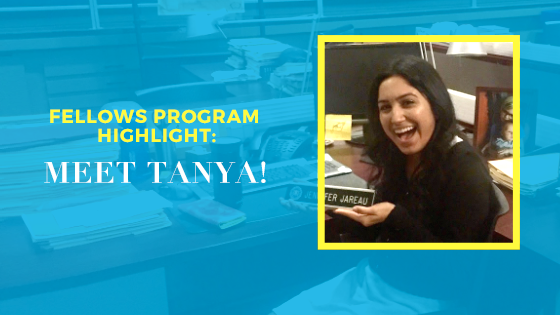 Meet Tanya Ortiz. Tanya is a Los Angeles native, born and raised in the northeast San Fernando Valley. She graduated from the University of California, Los Angeles in 2015 with a degree in Political Science and a last-minute minor in Public Affairs that ultimately led her to Coro.

Pictured above, Tanya poses on the set of CBS’s hit show Criminal Minds, which she had the opportunity to visit with the Hollywood Teamsters Local 399 during her Labor sector placement. Local 399 exclusively represents below-the-line workers in the motion picture industry, their members ranging from casting directors to animal trainers. While working with the Teamsters, Tanya assisted in compiling member testimonials that helped extend AB 1839, a bill that offers tax incentives for production companies to keep work in California. The film industry has consistently brought the state of California about $10 billion in revenue annually, and Local 399 has been integral in ensuring that continues to be the case. Prior to this experience, Tanya knew little about the function and influence of labor unions in Los Angeles. Over the course of three short weeks, she was able to witness first-hand the significant role it continues to play as a movement within contemporary public affairs.

After Coro, Tanya intends to venture into the world of city government in Los Angeles. Eventually, she hopes to pursue a degree and a career in urban planning.