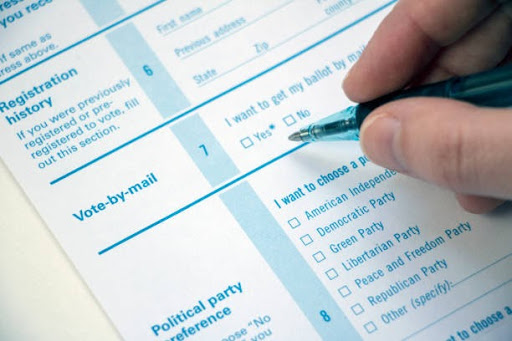 On October 19, the 63rd class of the Coro Fellows Program in Public Affairs began our electoral politics placement. Joining the campaign trail within the last three weeks of the election cycle was both a unique opportunity and a daunting uphill battle. The ballot measure and individual candidate campaigns were well underway; platforms had been established, volunteers identified, and endorsements made public. From the outset, it became abundantly clear to the entire cohort that we were entering into our new roles in the middle of “crunch time.”

Some Fellows worked with political action committees or nonprofits such as Sea Change PAC, Re-Imagine LA or Power California, while others were put onto candidate campaigns, both at the local and the federal level. Campaigns spanned from local Long Beach and Los Angeles City Council races, to an Orange County Congressional campaign, to a campaign working to unseat the incumbent Los Angeles District Attorney. During the workday, Fellows were busy aiding their respective campaigns. During seminars, we reconvened to debrief our experiences, ultimately drawing connections between our individual placements to build a collective understanding of electoral politics during a pandemic.

As such, our time in the Electoral Politics Placement was overwhelmingly influenced by digital organizing. Fellows unanimously agreed to use our time in our placements to gain a greater understanding of campaigning in the digital age. Moreover, we were excited to find that digital organizing did not impede our learnings nor hurt our ability to connect with voters. In particular, Fellow James Crisafulli reflected that his biggest learning opportunity was while phone banking for the California Calls campaign for Yes on Prop 15: “I spoke with quite a few voters who expressed serious skepticism about the ability to enact change through the political system. However, I felt empowered that I was often able to break through to those people by listening and respecting their beliefs.”

Echoing this sentiment, Fellow Angel Lira was able to reach many non-English speaking voters by phone banking on behalf of a Congressional campaign in Orange County. However, many of these voters didn’t answer their phones, so they weren’t reached until canvassers spoke to them in person during the final days of the campaign. Angel emphasizes,“it is clear that technology helps with outreach, but many of the same underrepresented communities are still being left out. Accessibility remains a challenge for many campaigns, and there needs to be a concerted effort to include constituents from traditionally under-resourced communities.”

Demonstrably, technology is changing the way elections are run and how campaigns are organized. With physical distancing practices in mind, Fellows phone banked, sent emails, attended virtual debates, and worked on voter guides, for example helping to create streamlined Interactive Sample Ballots that minimized wait times at polls. The utilization of technology in aiding organizing efforts has markedly increased, especially during this campaign season. In preparation, Fellows read articles that reviewed the importance of accessibility when making informed voting decisions and reflected upon the implications of the virtual campaign model in terms of equity.

The Fellows have come to more fully comprehend how technology serves to connect humans and keep them informed in a new world of physical isolation. Many of us anticipated spending time at both campaign headquarters, and being in the field to canvass by knocking on doors and meeting constituents. Instead, these familiar interactions were replaced with virtual meetings, such as Zoom “house parties,” as campaigns sought out creative ways to reach voters during a pandemic. Combining technology with tried and true campaign strategies allowed for effective problem solving and adaptation.

In particular, Fellow Victor Pacheco highlights the importance of technology in redefining what electoral campaigns are capable of achieving: “Learning how to maximize digital organizing tools was critical for our campaign to pivot during this socially distant campaign cycle.” While technology dramatically affected the specific organizing tactics that campaigns used this cycle, Fellows also learned about campaign constants, such as the network of stakeholders that shape and influence campaign objectives. Fellow Aditi Shenoy highlighted how “ballot measures are a really good way to impact policy change at the local level and are deeply connected to grassroots movements.” Fellow Jenna Karic agreed that effective political campaigns are inextricably linked to the communities they hope to serve. Her biggest takeaway from her placement was that “people matter, and if people know that their politician cares about them, they are more likely to engage and vote.”

With our eyes towards grassroots organizing and community advocacy, the Fellows are eagerly anticipating our next placement in the nonprofit sector. Until then, the Fellows will be participating in a variety of Focus Weeks, all of which will enhance our effective inquiry skills and prepare us for the complex and challenging questions we will surely encounter in the nonprofit space. 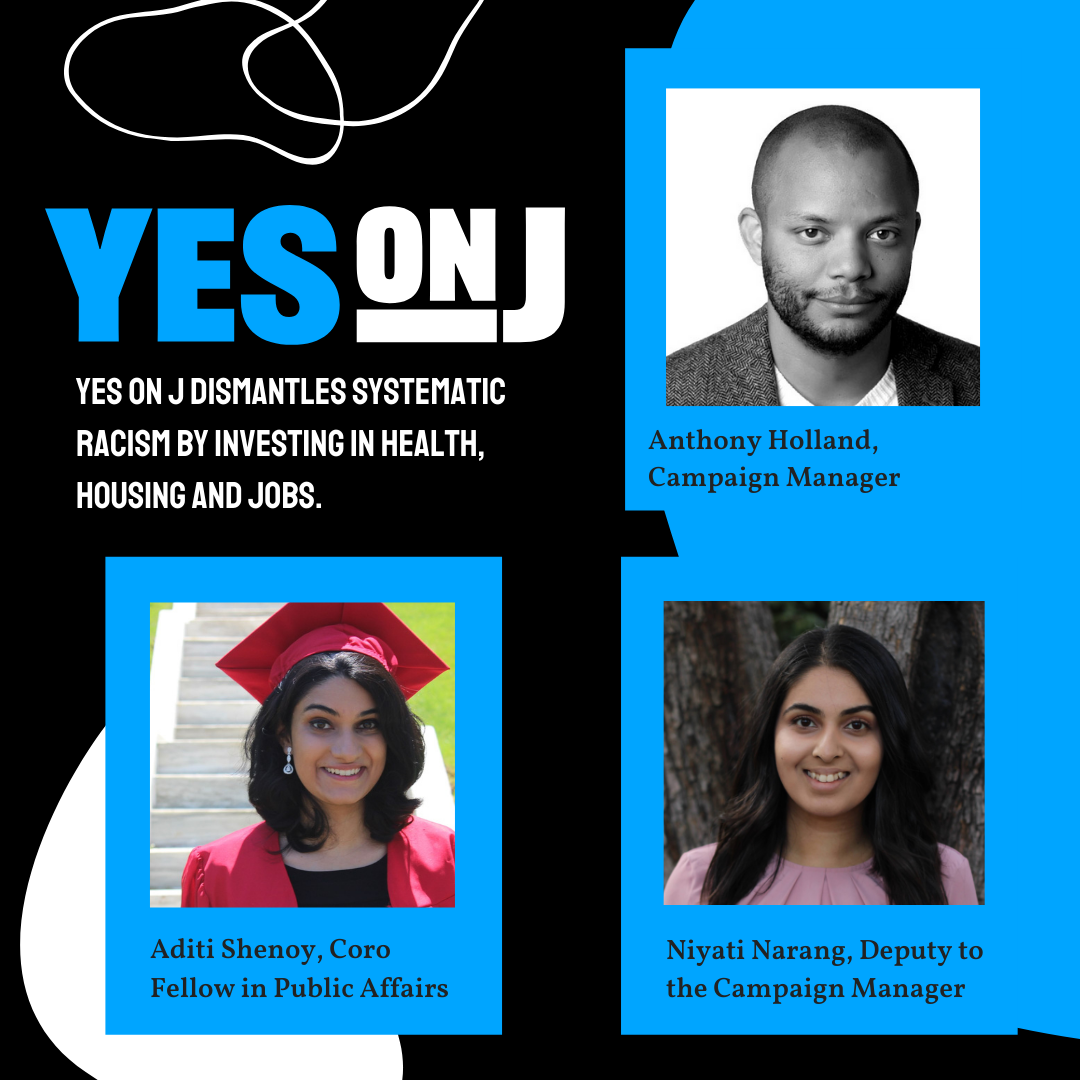 Measure J allocates no less than 10% from LA County’s general fund to community programs such as job training, supportive housing services, and alternatives to incarceration. My biggest takeaway from the campaign was that coalition building is incredibly important and effective. Over 100 organizations endorsed Measure J, and campaign staff included people from many of these organizations. The campaign brought together people from across issues and views in LA, leading to its ultimate success. 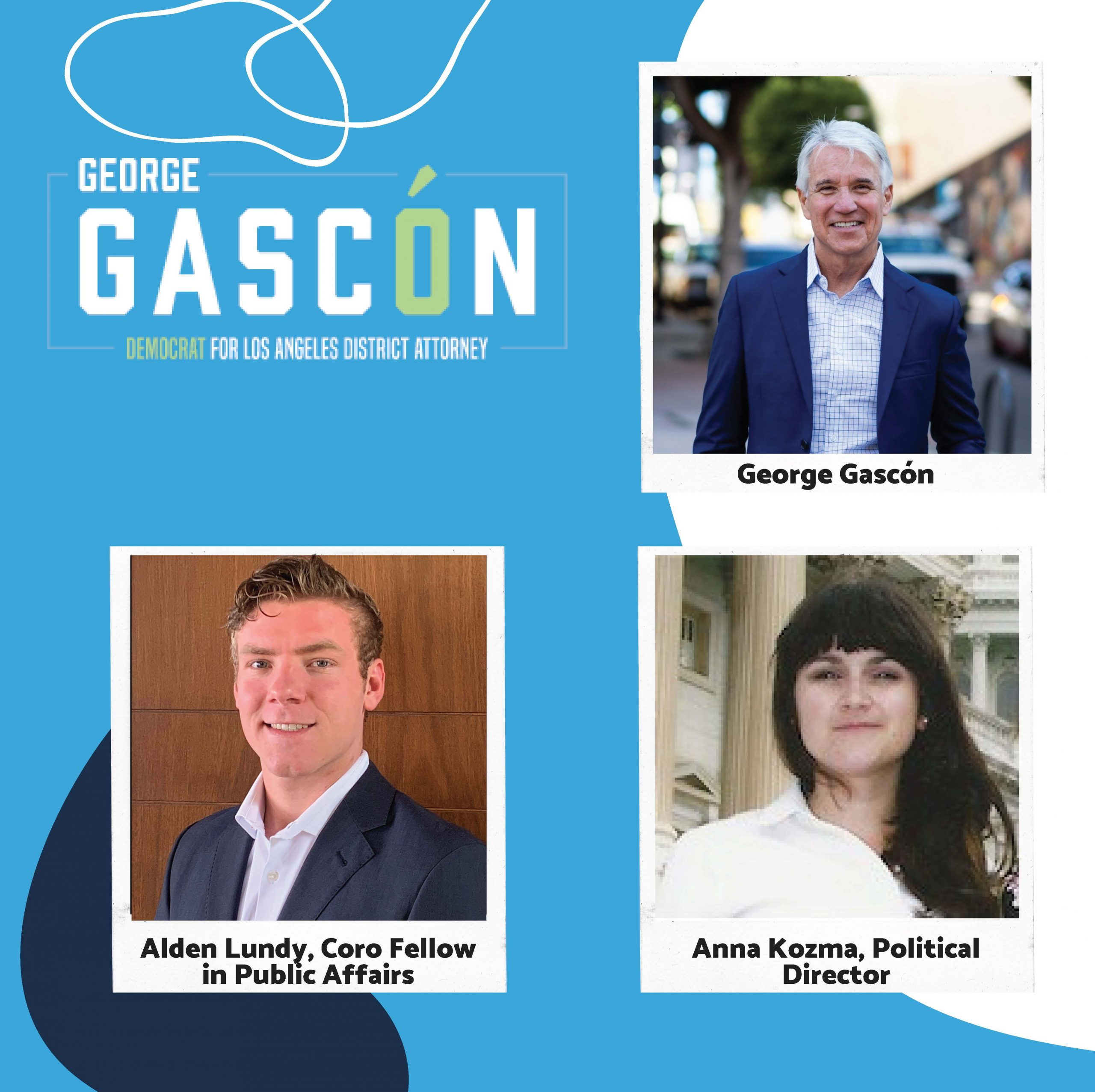 George Gascon ran and won his campaign to be the Los Angeles District Attorney. While working for the campaign I saw the importance of community volunteers and grassroots activism. The campaign’s success was tied to listening and involving the people and communities of Los Angeles. 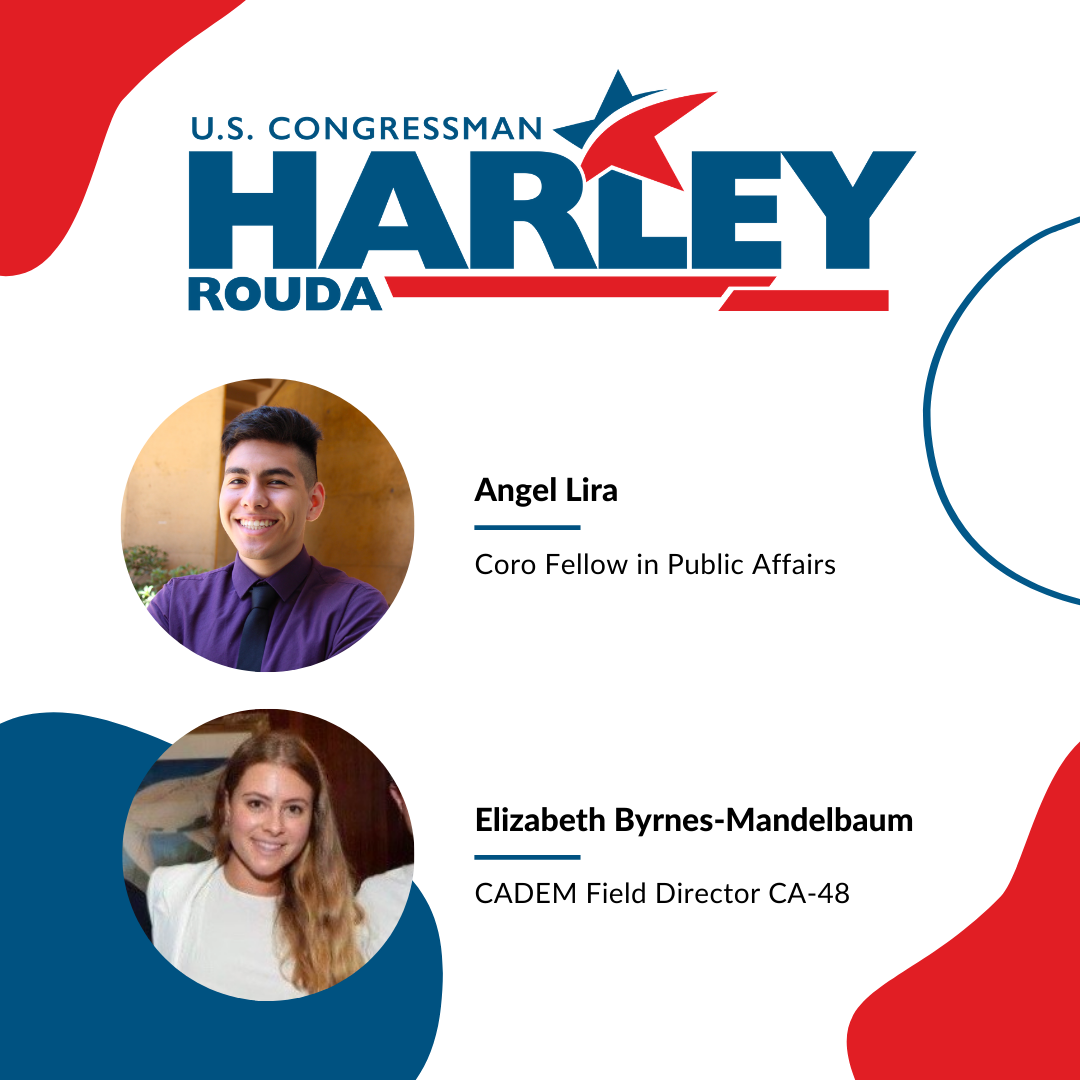 Harley Rouda is the Congressman for California District 48 and ran for re-election. My main takeaway was how much work and commitment organizers and volunteers put into direct voter contact, and reaching people where they were at. Engaging and mobilizing voters, especially first-time voters, takes a great amount of effort, but it is the foundation for our democracy. 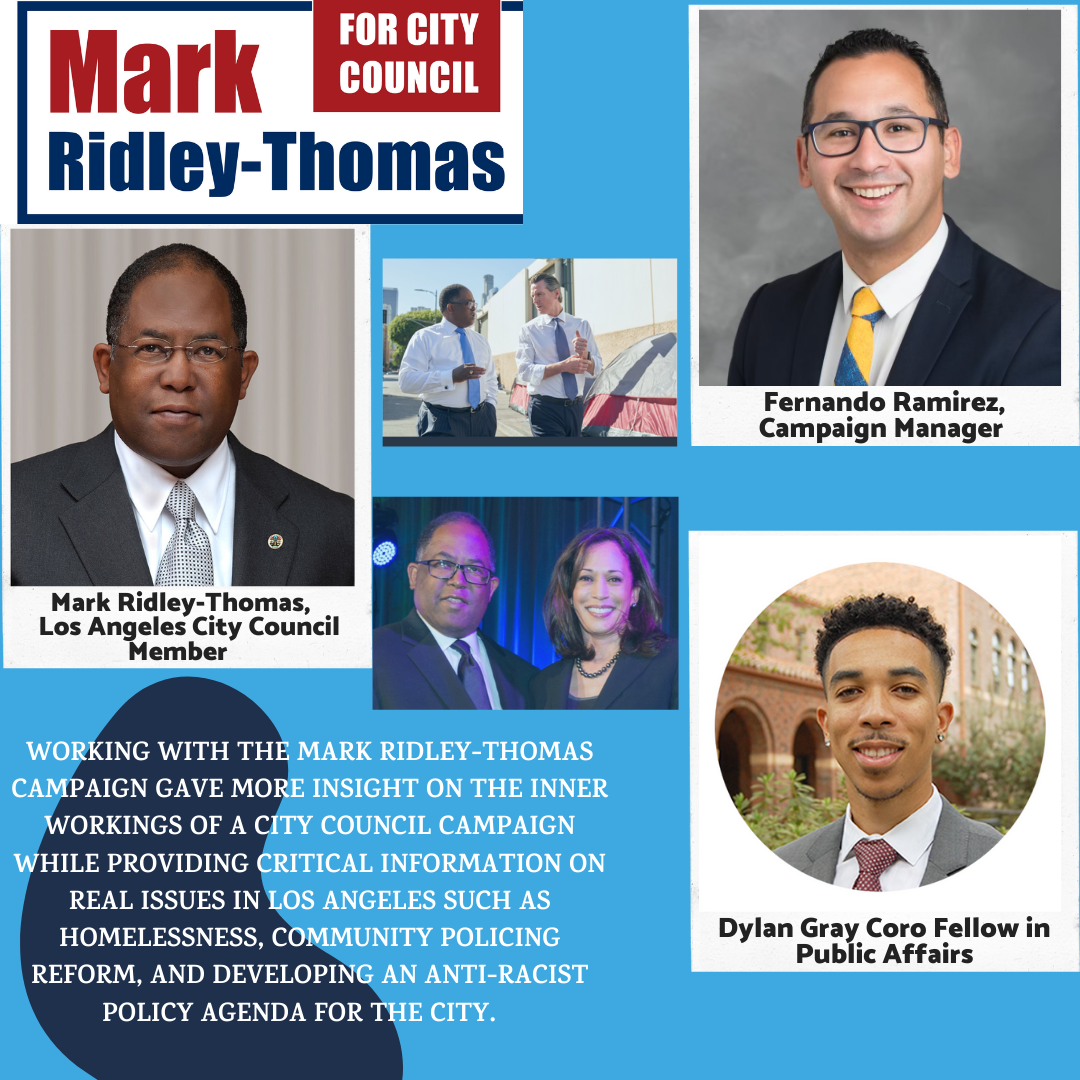 Working with the Mark-Ridley Thomas campaign for CD-10 provided insight on the inner workings of a city council campaign while providing critical information on real issues in LA such as homelessness, community policing reform, and developing an anti-racist policy agenda for the city. 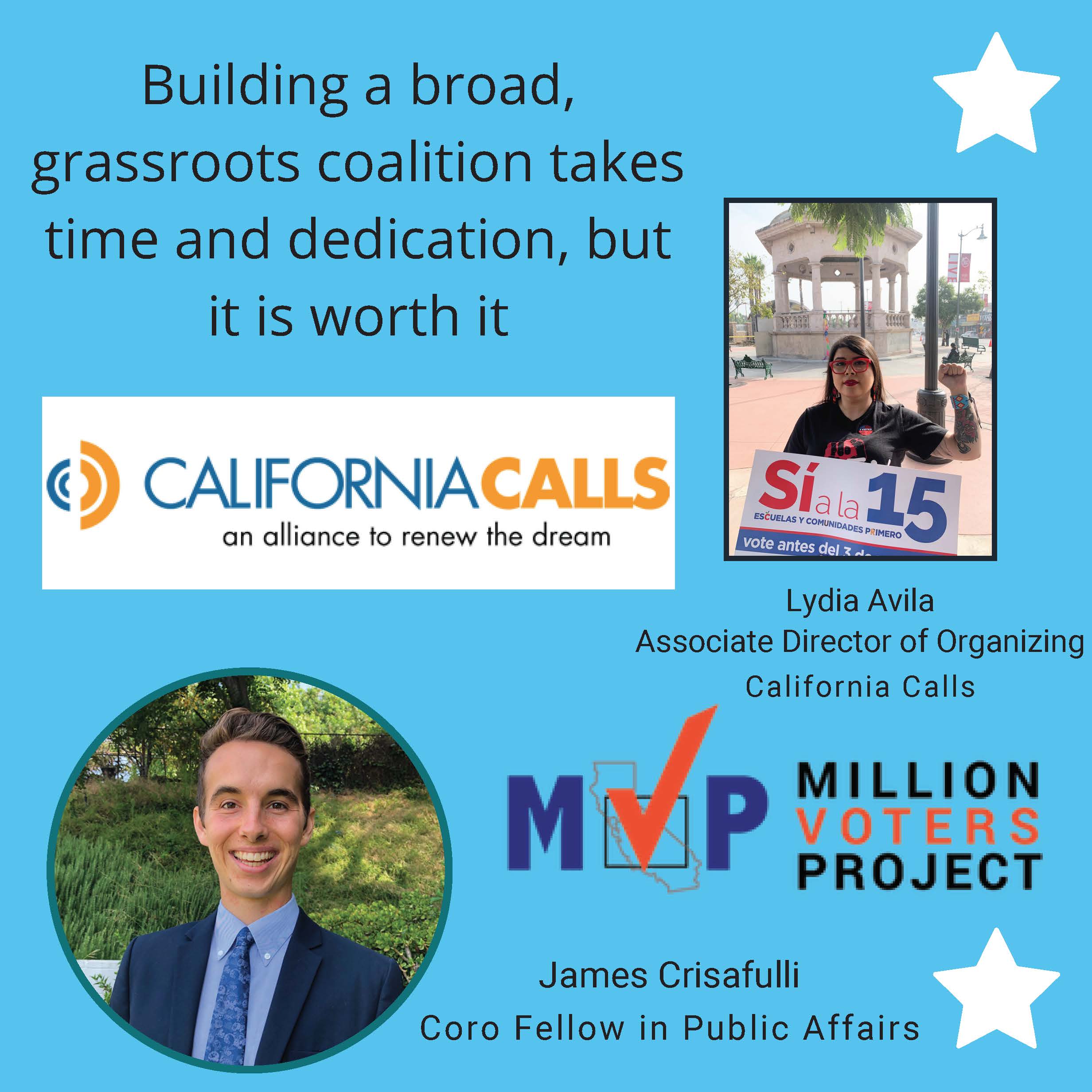 California Calls is a growing alliance of 31 grassroots, community-based organizations that engage, educate and motivate new and infrequent voters among young people, from communities of color, and from poor and working-class neighborhoods. My main takeaway was the time and effort it takes to form a broad coalition and to mobilize new voters, but that both of those actions are extremely worthwhile in shaping our political future. 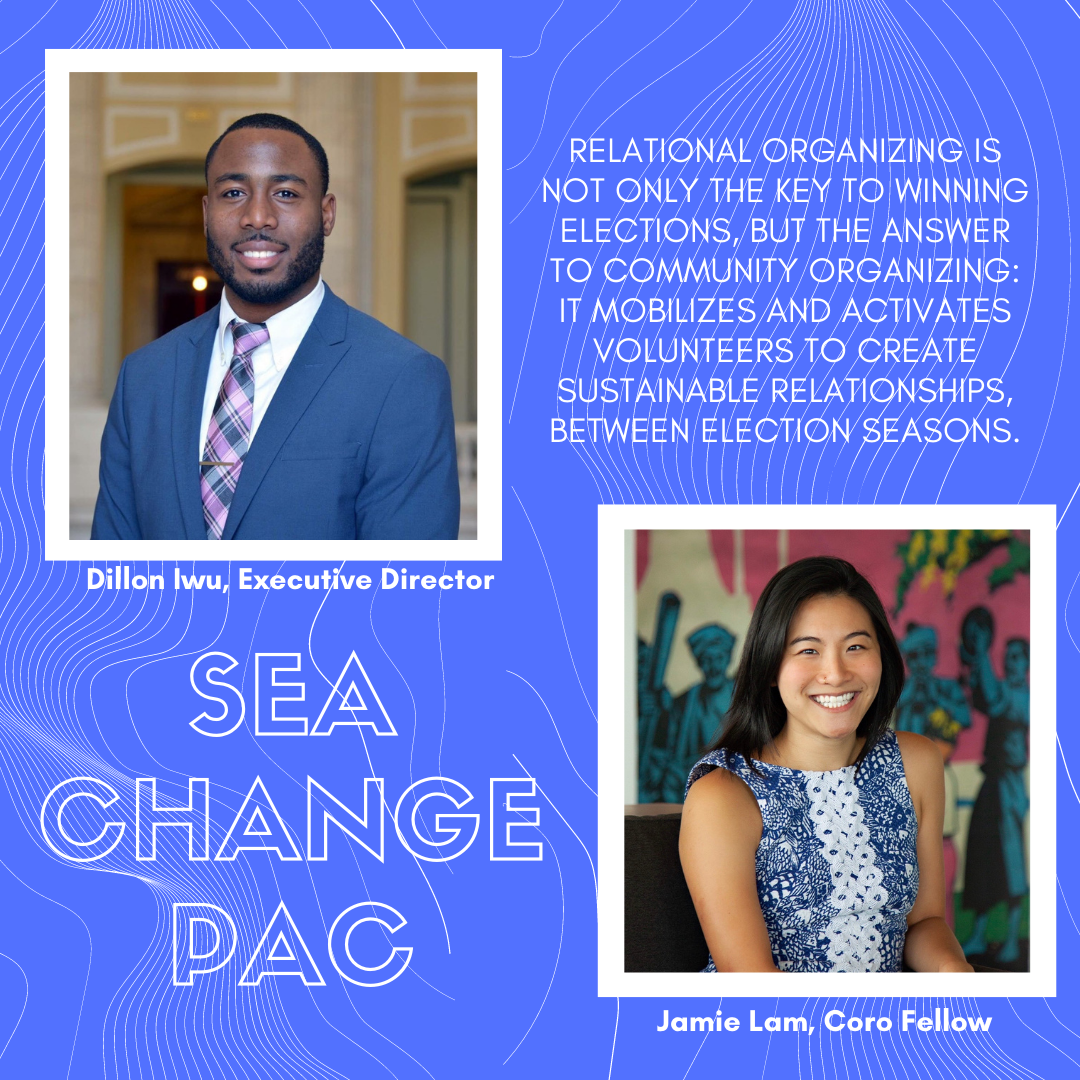 Launched by California Democratic Congressmember Karen Bass, Sea Change connects community members, activists, and organizations that are resisting the Trump agenda. In 2018, Sea Change PAC helped flip 5 House seats in Southern California blue. In 2020, they fought to keep those seats. Working with organizers, I learned that relational organizing is not only the key to winning elections, but the answer to community organizing: it mobilizes and activates volunteers to create sustainable relationships beyond election seasons. 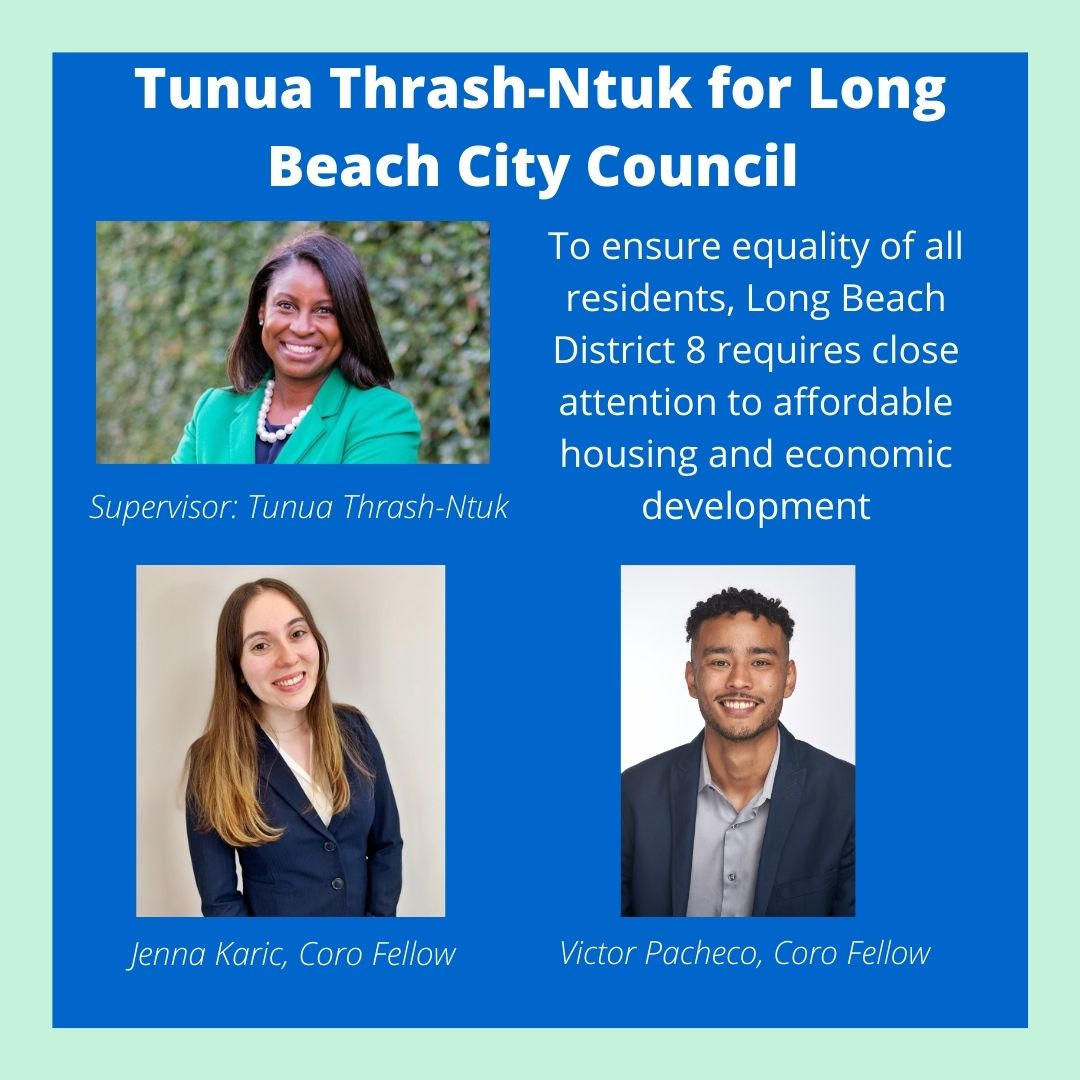 Tunua Thrash-Ntuk is the Executive Director of Local Initiatives Support Corporation (LISC) and recent candidate for Long Beach City Council District 8. During her candidacy, she fought for more affordable housing, economic development, and the revitalization of Uptown Long Beach. All of these goals outlined in her plans emphasized to me how supporting local communities is vital to an equitable, prosperous city. 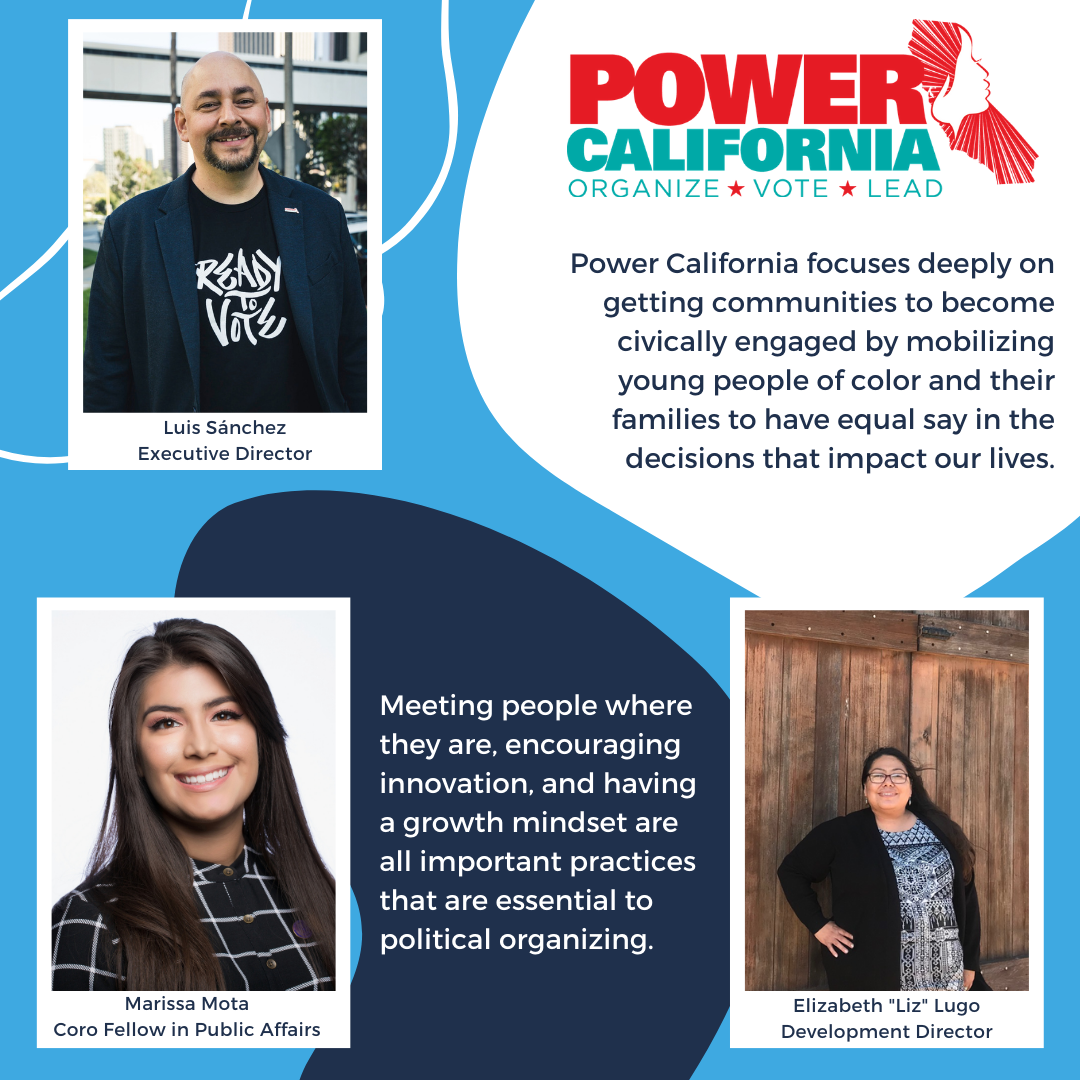 Meeting people where they are, encouraging innovation, and having a growth mindset are all important practices that are essential to political organizing. 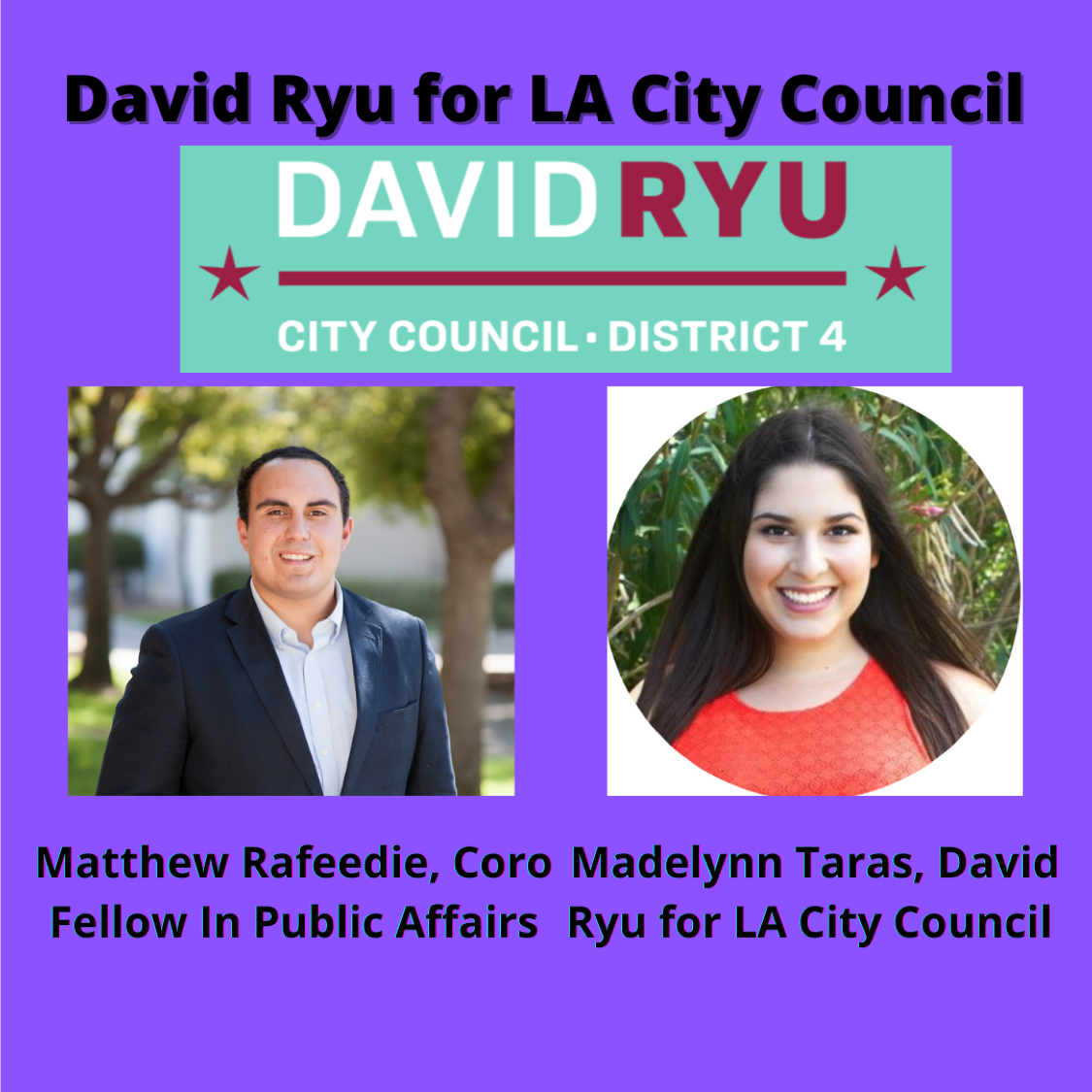 David Ryu is a Council Member for the City of Los Angeles and was up for reelection during a time of increasing nationalization of politics. Councilman Ryu was seeking reelection during a year of national and local crisis due to COVID-19 and other local issues. Biggest takeaway: the politics at the local level are increasingly reflecting the politics of the wider nation. 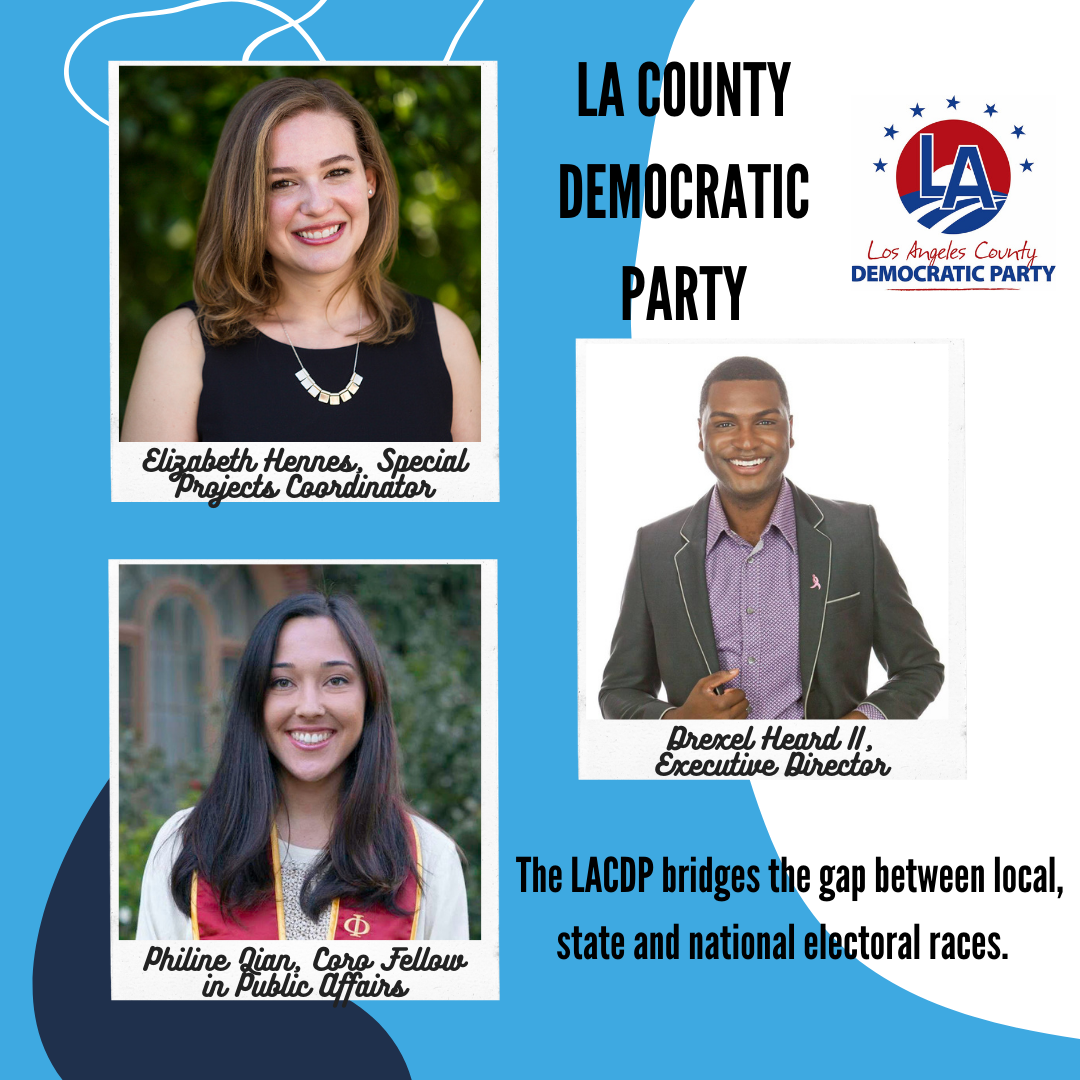 The LACDP represents almost 3 million Democrats across Los Angeles County, making it the largest county committee in the country. Biggest takeaway: the LACDP bridges the gap between local, state and national electoral races.