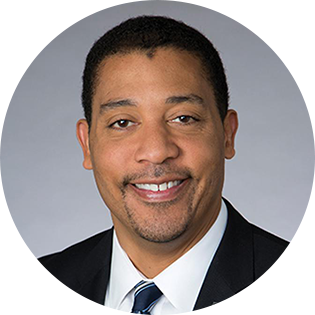 Prior to rejoining SAG-AFTRA, where he previously served as general counsel from 2002 to 2006, White was managing principal of Los Angeles-based Entertainment Strategies Group LLC, providing consulting services to the entertainment industry. He was a labor and employment attorney at O’Melveny & Myers LLP before joining the executive ranks of
SAG-AFTRA. Prior to law school, White was the executive director of an innovative youth services organization, Youth Opportunities Unlimited.

A Rhodes Scholar, White is a graduate of Grinnell College, Stanford Law School and The Queen’s College, Oxford University. He serves as a board member of the Federal Reserve Bank of San Francisco. He is former chair of the board and current trustee of the SAG-AFTRA Health Plan, former chair and current trustee of the SAG-Producers Pension Plan, former chair of the board of trustees of Grinnell College, and former vice chair of the Industry Advancement and Cooperative Fund. He is a trustee of the AFTRA Retirement Fund and a board member of the Motion Picture and Television Fund, the SAG-AFTRA Foundation and The Actors Fund. White serves as a commissioner for the Industry Commission on Eliminating Sexual Harassment and Advancing Equality in the Workplace, and is a member of both the Academy of Motion Picture Arts and Sciences and the Academy of Television Arts and Sciences.

White has served as a Los Angeles-area commissioner for urban planning and development. He has been a contributing writer for the Los Angeles Lawyer, has been featured in various publications including Los Angeles Magazine, and has served as a commentator on national and industry publications and radio shows. He has received numerous awards throughout his career, including the John M. Langston Bar Association’s Attorney of the Year award in 2014, the National Bar Association’s Entertainment, Sports & Art Law Section Attorney of the Year in 2010, and the Association of Media and Entertainment Counsel’s Labor and Personal Representation Counsel of the Year in 2009.