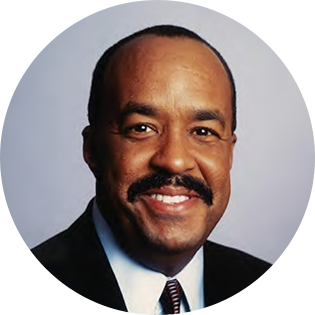 Robert K. Ross, M.D., is president and chief executive officer for The California Endowment, a private, statewide health foundation established in 1996 to address the health needs of Californians. Prior to his appointment in September 2000, Dr. Ross served as director of the Health and Human Services Agency for the County of San Diego from 1993 to 2000.

Dr. Ross has been actively involved in community and professional activities at both the local and national level. He is a member of the President’s Advisory Commission on Educational Excellence for African Americans, Co-Chair, Diversity in Philanthropy Coalition, and has served as a member of the California Health Benefit Exchange Board, the Rockefeller Philanthropy Advisors Board, National Vaccine Advisory Committee, and on the boards of Grantmakers in Health, the National Marrow Donor Program, San Diego United Way and Jackie Robinson YMCA. He is a Diplomate of the American Academy of Pediatrics, served on the President’s Summit for America’s Future and as chairman of the national Boost for Kids Initiative, and was honored by the Council on Foundations as the Distinguished Grantmaker of the Year for 2008. Dr. Ross received his undergraduate, masters in Public Administration and medical degrees from the University of Pennsylvania in Philadelphia.

The California Endowment makes grants to organizations and institutions that directly benefit the health and well-being of the people of California. For more information, visit our Web site www.calendow.org.