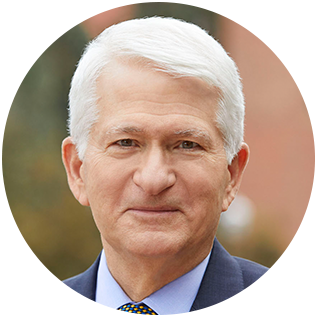 A champion of high-quality, accessible public higher education, Gene Block has served as chancellor of UCLA — overseeing the university’s three-part mission of education, research and service — since 2007. His institutional priorities include academic excellence, civic engagement, diversity and financial security.

Under Chancellor Block’s leadership, UCLA has greatly enhanced its position as a national leader in enrolling undergraduates who come from low-income backgrounds, have been traditionally underrepresented in higher education or are among the first in their families to go to college.

During his tenure, UCLA has also greatly grown its profile and stature. Regularly the most applied-to university in the nation, UCLA has advanced in rankings in nearly every discipline, and has significantly deepened international partnerships and engagement with its 500,000 alumni worldwide as well as with other academic and civic institutions. Now with more than $1.6 billion in annual research grants, UCLA’s research and entrepreneurship ecosystem has thrived under Chancellor Block and UCLA has been recognized as one of the top universities for startups. In 2019, UCLA completed one of the largest fundraising campaigns ever undertaken by a public university, raising $5.49 billion.

An expert in neuroscience, Chancellor Block’s current research focuses on the effects of aging in the nervous system and how it impacts biological timing in mammals, including humans. He holds faculty appointments in psychiatry and biobehavioral sciences in the David Geffen School of Medicine at UCLA and in integrative biology and physiology in the UCLA College of Letters and Science.

Chancellor Block earned his bachelor’s degree in psychology from Stanford University and master’s and Ph.D. in psychology from the University of Oregon. Before becoming chancellor of UCLA, Block served as vice president and provost of the University of Virginia, where he was also the Alumni Council Thomas Jefferson Professor of Biology. During his 29 years there, he served as vice president for research and public service and as founding director of the National Science Foundation Science and Technology Center in Biological Timing.