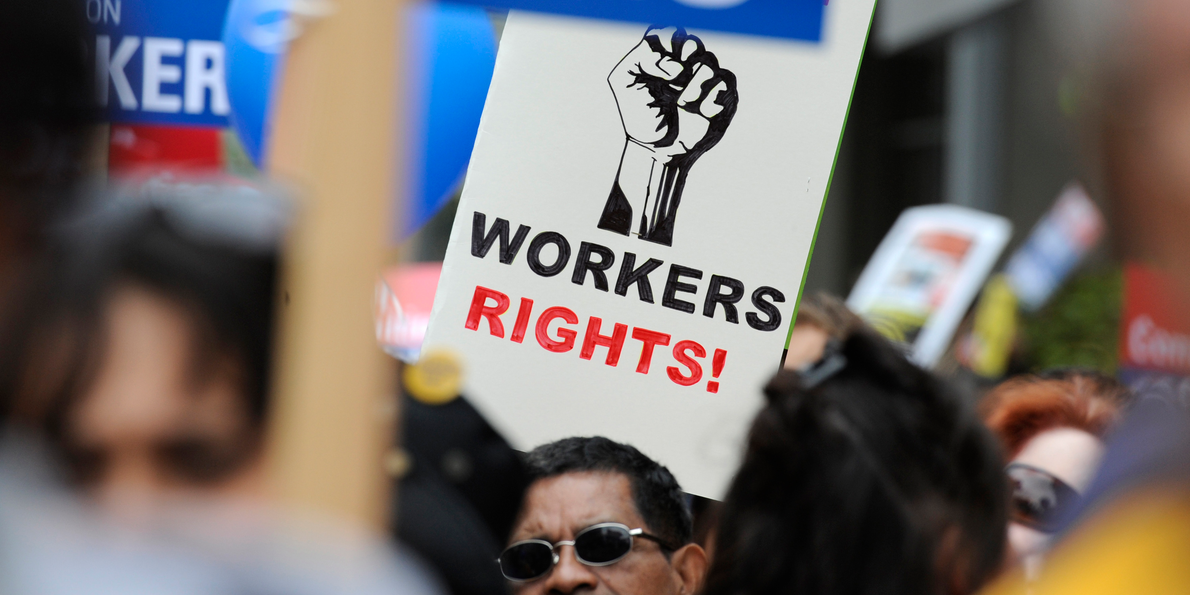 On Monday, March 22nd, the 63rd Class of Coro Fellows started their final placement rotation in organized labor. Fellows were placed in a broad swath of labor unions, including The LA/OC Building and Construction Trades Council, Unite Here! Local 11, SEIU 721, SEIU-UHW and the Writer’s Guild of America. For the first time all year, several Fellows were placed together at different unions, which brought a new and enjoyable teamwork element to our placement experiences.

Throughout the labor rotation, Fellows commented on how fitting it was that this was our last rotation, as labor seemed to fill in a missing piece of our eight-month learning about the cross-sectoral nature of public affairs. Fellow Jamie Lam commented that “despite what many reports say is a bleak outlook for unions nationally, it is clear that public and private sector unions still have a huge influence in industries across the LA region.” On a similar note, Fellow Jenna Karic noted that “the immense support from non-union members changed the vision of how I saw the labor sector. Labor had become siloed in my perspective, as we had [so far] only heard the opinions of those who encountered problems with them.”

A number of Fellows noted that this placement sector challenged preconceived notions they held about labor and changed some of their previously held views. Fellow Aditi Shenoy commented, “I was surprised that there were unions that serve people who make more money than typical working class unions, like the Writer’s Guild, where I was placed. It made me realize that unions benefit pretty much all workers – blue collar and white collar alike.” Fellow Matthew Rafeedie summarized his learnings and challenges about being placed with one of the largest public sector unions in the country: “Coming from a more conservative background, my biases and previous perspectives of labor unions allowed me to start this placement with a skeptical eye but an open heart. The risk I took throughout the placement was that I openly acknowledged my preconceived biases to all those I worked with, and shared how and why conservatives interact in a certain way with public sector unions. This led to candid conversations that allowed me and those I interacted with to learn and understand each other better. That risk-taking also led me to change my view about the role public sector unions play in our country and communities.”

Finally, some Fellows used this time to dig deeper in issues and questions they have been passionate about throughout the Fellowship year. Fellow Philine Qian noted that in an interview she learned how “a primary focus of the building trades is creating the most and the best jobs for their members. The content of those jobs can be less important, which speaks to why the building trades support jobs in oil & gas while rejecting jobs in other clean energy industries that are not currently unionized. This is an understanding I will take with me as I continue to be an environmental advocate.” Fellow James Crisafulli shared that he was “stunned by the pervasive nature of workplace harassment and hostile working conditions, especially in the service industry. I heard so many powerful stories from union members and organizers about their mistreatment as employees, and it gave me a glimpse of what I am realizing is the dark underbelly of hospitality work in LA.”

As the Fellows begin their Spring Projects and the final weeks of our fellowship year, it is with a deep appreciation and much improved understanding of the role and significance of organized labor in Southern California. After five placements, much discussion, and ample reflection, it’s safe to say that our cohort is also beginning to understand and celebrate the process of our learning throughout the fellowship year. After placements in electoral politics, nonprofit, government, business and now labor, we are drawing connections, seeing the links, and getting ready to graduate the program as better thinkers and leaders.